Breaking Up With Comics 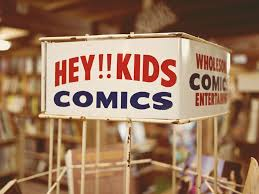 We all come to some point in our hobbies that we come to a crossroads or burnout of sorts. I've reached that point with comics for different reasons. I dropped my pull list at my local comic shop, I feel like a horrible person for doing but I had to do it.

First and foremost, I'm just sick and tired of taking care of single issues and even collected trades. They've over run the mancave, sitting in piles uncatalogued, many unread just sitting around collecting dust. I used to love cataloging my books, putting them in alphabetical and numeric order. I even went on a two year long project of putting all of my books in a new order altogether, by sale date, the goal being to reread my collection in the order that the books were published and put on sale. That was fun, but it got to be such a large undertaking that I decided to keep it narrowed down to comics from 1977 to 1987 and continue working on it going backwards from 1977 as I work on my bronze age collection. Right now all of my books from that alst two years are getting shoved into boxes with no bags and boards which at one point would be blasphemy to me.

I'm not enjoying much of anything. I'm not saying that there isn't anything good coming out of the Big 2 and elsewhere, but I'm tired of writers that should be delivering but not doing so. I'm tired of seeing these long periods of times where everything is dark, gritty and grim. Those stories are fine in small doses, long term though it's just no fun. So I have found joy in reading a very limited number of writers and titles. Reading anything lately though has been feeling way too much like work. If it feels like work take a step back, right?

Lastly, I no longer find any value in paying $3-$4 for a single issue. the value just isn't there for me anymore. Chalk it up as the crotchety old man rising up in me. I just can't pay it anymore whether in print or digital, but I still do want to support the writers and artists that I am enjoying. Waiting for the price drop for digital feels like a big stab in the back to my local shop. So that leaves me waiting for the trades which just circles around to having to take care of physical books again.

I have no idea what I want and where I want to be with comic books right now. Maybe I just need a break. I took a break from comics once before and it lasted twelve years. I don't want to see that happen again. So, I'm taking at least a three-fourth months off and see where that leads.