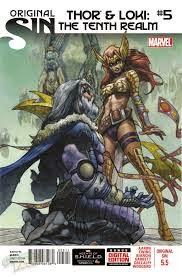 This last issue has been out for a while now and I'm not going to go into a play by play account like I have with the previous issues.

The series as a whole was merely okay. The idea that the Queen of Angels had no idea who Angela was all this time I don't buy into at all. Angela's reaction to learning that she's Asgardian, fits but I have not changed my stance on it. I fully despise the idea of Angela being Asgardian with every fiber of my comic book loving being.

I am further disappointed that Angela does not return to Gamora and the Guardians of the Galaxy. Angela says that she has no home but that is so far from the truth, she had a home and family with that band of galactic misfits and that is where she needs to be, end of discussion.

I said that I would give this series a try and I did. Once again Marvel fails and dropped the ball with yet another character, one that could have held a unique and special place in the Marvel Universe. They'll never learn.
Posted by Greg Osborn at 10:21 AM