You've Got the What? 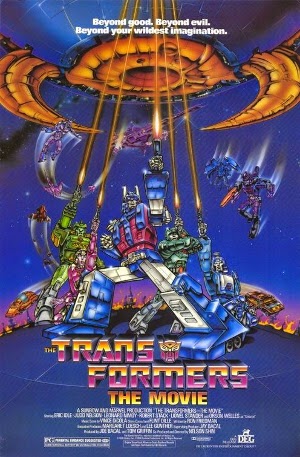 I started watching season three of the Transformers, again. This is the fourth time I've done so in the last 18-24 months. Thinking maybe I should do something with that. My first thought was doing a spin-off podcast, either a review or commentary type show, or both. But I really don't want to do a solo show and I don't my great co-hosts to feel that they're obligated to join me unless they want to. So, as the great Ronnie Van Zant once song, all I can do is write it. I need to start at the true beginning of season three though and that is with Transformers the Movie.

First off, Hasbro came right out and told you or were at least preparing you for the death of Optimus Prime. Prior to the movie's release and during, commercials for the toys and the movie asked the question, "Does Prime die?" It was crazy talk. There was no way in hell that Optimus Prime dies. Well, he did and my mind was blown.

Killing off characters never happened. Yet not only did many of the classic characters get knocked off, others were changed into into characters altogether and others were just eliminated from the series altogether and their toy counterparts were no longer in production. I never got my Starscream, Shockwave, Jazz or Wheeljack because of that. They were already hard to find and the movie sealed it.

Another thing I never understood was how the two factions were treated in terms of combat in both the series and the movie. In the first two seasons of the series both Autobots and Decepticons could get could bashed up and wounded, even Megatron took his share of lumps. In the movie however the Autobots were like butter against the searing hot knife of the nigh invulnerable Decepticons. What gives? It reminds me of Blizzard's Horde bias ;p.

Even when Rodimus and Grimlock are discovered spying on the 'Cons on Chaar. The Decepticons are down to zero energon and can't even fire their weapons or transform, but Rodimus and Grimlock are blasting them at point blank range and the 'Con's are just taking it like its a gentle rain but in later episodes the 'Con's go back to taking their share of dents and laser fire. No consistency in visuals and storytelling.

The movie itself wasn't that bad, it just lacked some real planning and foresight from Hasbro and Sunbow.

The above are my biggest gripes. We did get a two great tunes from Specter General aka Canadian rock band Kick Axe. The anthem for all things Transformers from Stan Bush. I've had that soundtrack on vinyl, cassette, CD and digital download.

I really dug Hot Rod, Kup, Blurr, Springer, Ulrtra Magnus and even Wheelie despite how annoying he was. On flipside it was pissing me off while watching season three as a kid to see all of the new episodes centering on just those characters. I was glad to see that Dan Gilvezan was still getting at least some work in the third season as Bumblebee, although even that didn't last long. Another thing I dug is how bat crap crazy Galvatron went after his plasma bath. Not only was this guy more sinister than Megatron, but he was flipping insane.

So, expect something. I'm not sure what yet, but there will be something.