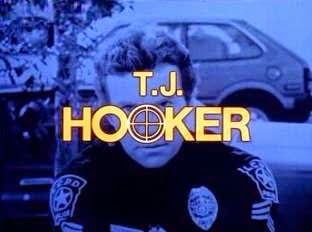 This has been in the works since I started this blog and you shouldn't be surprised by it. I love T.J. Hooker. Anybody that knows me knows it's still one of my absolute favorite television shows of all time. Yeah, it has many of the failings of 80's television but it was an exciting show to watch back when it debuted in 1982 and is at the very least a fun show to watch today.

When Hooker first aired in the spring of '82, I was still nine years old and like many kids I dreamed of being in law enforcement. It wasn't until a number of years later that I dropped that carrer choice, having witnessed corruption amongst police officers first hand on multiple occasions. That didn't diminish my love for cop shows though.

Hooker was created by Rick Husky and the show would be produced by television mogul Aaron Spelling and Leonard Goldberg. Husky had intended the show to be a revamped version of The Rookies, a cop show Husky had worked in in the '70's. The show was orginially going to be titled The Protectors but it was decided after filming the pilot to focus on William Shatner's character, veteran Sgt. Thomas Jefferson Hooker. The pilot aired as a movie of the week on ABC with a short first season as a mid season replacement.

Hooker was a detective for the fictional LCPD. Although it was never revealed what the acronym meant, many assumed it was Los Angeles County Police Department as the show was shot in and around Los Angeles. While investigating a case Hooker and his partner were attacked by street thugs. Hooker was badly wounded and his partner was killed. Hooker requested to become a training officer and be put back on the streets, to help train and prepare rookie cops.

Besides the legendary William Shatner starring as the title character, the pilot also has Richard Herd as Captain Dennis Sheridan, and Adrian Zmed as rookie Vince Romano. The trio would be the main cast through the first season. With the start of season two Heather Locklear would join starring as Stacey Sheridan, the captain's daughter. Towards the end of season two, James Darren was cast as veteran beat cop Jim Corrigan and would become Stacey's training officer and partner.

The series would have a number of guest stars such as Leonard Nimoy, Jim Brown, David Caruso, Jerry Lee Lewis, the Beach Boys, a ten year old Tori Spelling and Hooker's daughter Chrissie was played by Nicole Eggert. Sharon Stone also starred in an episode that served as a backdoor pilot in the fourth season. Stone starred as a detective from Hollywood however the series was not picked up by ABC.

As with all television series, the viewership dropped. The series was slightly revamped with season three and viewership peaked up some but ultimately it was not enough. T.J. Hooker would get canceled in the spring of 1985 after it's fourth season. Although ABC gave Hooker the boot, CBS picked it up, but the production team imposed some significant changes. The location was moved from Los Angeles to Chicago, Adrian Zmed left the show to become the new host of Dance Fever, instead of one hour shows, the series was made into 90 minute movies for the Crimetime After Primetime line-up. The series would never recover.

Unfortunately only season one and two of T.J. Hooker are available on DVD, and I could only find season one streaming on Amazon Prime. Seasons one through four need to be made readily available for all to watch 24/7 and never be taken away.

I can't tell you how much I loved this show as a kid. Watching my favorite starship captain fighting crime on the streets, with a dancing fool, a classic crooner and one of the most classy and gorgeous women in TV history, you can't lose, everyone's a winner. 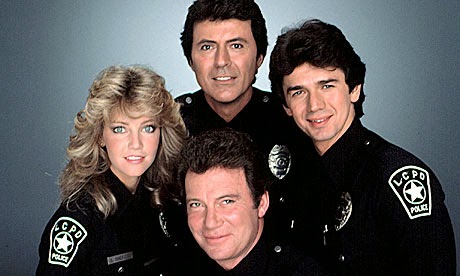 With the number of remakes being done on properties from the 80's, I'm surprised that Hooker hasn't been tapped yet. I'm not sure if I'd want to see that. I'd be to afraid that it would be made as parody to the original and not be given serious thought.

I'm not entirely sure where I'm taking this from here. Doing an episode by episode recap will only get me through season two. It's too bad the A-Team and Hooker were on competing networks. Imagine a crossover where Hooker gets involved in a case that the A-team was hired to take care of. A geek can dream, right?
Posted by Greg Osborn at 1:45 PM