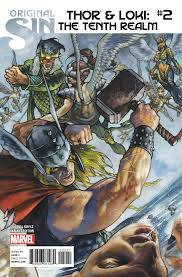 Issue two opens up showing us the hut in the forest from the first issue, the prison of gods. This time, a candle light can be seen from the window and as we get a closer look we see the arm and and hand of somebody who is otherwise entirely out of view.

We immediately jump to some where in outer space. The Guardians of the Galaxy are being attacked by warpjackers, snotty rich kids from space that hijack ships in warp just for fun. There is roar of thunder and  Angela explains that it is a voice, it is telling her that door home is open. The voice is of course Future Loki and Angela takes one of the warpjackers ships and leaves the Guardians to fend for themselves. We see Future Loki monologuing about how Angela and Thor were not meant to meet for months later against a common foe, and how dull that would be.

Thor and Loki have made it to Heven, the Tenth Realm and are greeted by a pair of angels. The introductions go well until Thor mentions who he is and where he is from. Fighting of course ensues. Thor explains that he is only looking for his sisters but the angels honestly seem to have no idea what he's talking about. We also see Kid Loki sneak away out of the fight as usual, or so it seems.

A messenger informs the Queen of Angels of the Asgardians who orders that two dreadnoughts be dispatched to the fight. Thor meanwhile is continuing to beat the hell out the Angels and he quickly dispatches the two dreadnoughts. The Queen then orders that a destroyer which some kind of planet killer, however she finds Loki putting a blade to her throat. The two share words and the Queen figures out that Loki is a frost giant not Asgardian, and so the two agree to parlay in a more civil manner.

Thor is still in command of the battle with angels. he again question about his sister and is told that if they knew who she was, she would already be dead. The angel  talking to Thor then heralds the wingless one, the strongest of them all has returned home. Thor turns around to see Angela hovering above him, weapons drawn and ready to kick his ass.

﻿
That is where the issue ends. Seeing Angela run out the Guardians was sad, but next issue we get to see her throw down with the God of Thunder. Should be good, looking forward to it. ﻿
Posted by Greg Osborn at 10:46 AM