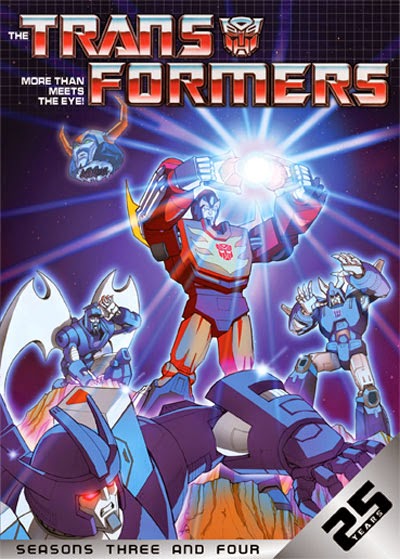 As I mentioned here, I wanted to do something with Transformers (G1) season three. My co-host and long time friend Dave Brown reached out to me said he'd love to do some with Transformers and other cartoons. We did some brainstorming and this what we've come up with.

A spin off podcast on various cartoon series. Each episode will be us watching one episode doing commentary and then a quick review. We'll be posting the video on YouTube and and audio version to itunes. This is something that we can do without a regular schedule and fit in whenever we both have time. So we're looking at at 45-60 minute show at most.

Because I hate editing and have not yet found an editing program that I like and can afford, this again will be a raw and unedited show. Which should be interesting especially for the video side of it.

We'll be starting off with a one off show that is just a quick and dirty review of Transformers the Movie and Five Faces of Darkness, no commentary. The first regular episode will be joint commentary and review and will on The Killing Jar. We will work our way through G1 Transformers season three, one note though, we'll be going by production order, not by episode number or air date. We'll be ending this portion of this new venture with another quick and dirty review of the craptastic three episode season four.

After we finish up season three of Transformers, or maybe even during, we'll be adding other cartoon series into the mix and working our way back to the first season of Transformers. It just depends how far Dave and I want to take this. It will all depend on what show we have equal interest in, what we can find streaming, what we both have on DVD or what we can find for dirt cheap. We might discuss adding some animated movies and anime series into the mix. Like I said, it just depends on how far both of want to take this.

We'll be doing a test run sometime this week to make sure everything is working fine. If it turns out really well maybe we'll even post it and hope that viewers and listeners give us some feedback and suggestions. You'll be able to find the new show on the How I Geek feed at Podbean and on itunes. The YouTube channel will be added to the links sidebar both here and at Podbean.

Just one thing left to figure out and that's a name. We haven't come up with a name and I don't know if we need one. My original thoughts were doing this without a name and for our show titles and just using the the name of the cartoon series we're watching and its respective episode titles.

Keep an eye out, I'll let you all know we the first episode is up.
Posted by Greg Osborn at 11:35 AM