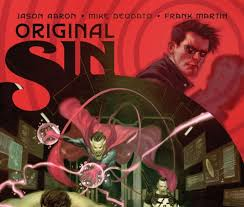 The fourth issue of Original Sin is here and with it we are no closer to finding the Watcher's killer, however we we do learn who the mysterious boss is.

All three teams sent out by the mysterious boss figure out that something isn't quite right, and we see Bucky abandon he teammates, return to Earth and not only kill Nick Fury but behead him in the previous issue.

We see the all three teams figure out that they've been lied to. Punisher and Dr. Strange go to Avengers tower where they find Hulk and Wolverine looking over Nick's dead body. Strange puts Wolverine in a binding spell, and Punisher uses explosive rounds to send Hulk through the wall and out the of the building. The duo meet the Orb who is expecting to be killed however Strange and Punisher free him so they can track the Watcher's stolen eye.

Black Panther, Emma Frost and Ant-Man find an unknown space station 200 miles above Earth's orbit. Once inside the soon run into Punisher, Dr. Strange and the Orb. Tension builds quickly as everybody knows they've been lied to and have no idea who they can trust. tension builds further the orb reveals that Bucky is there with the eye.

As everybody is on edge ready to strike out at any time, another ship docks with the station. Moon Knight and Gamora hitched a ride with Rocket. Gamora immediately attacks Bucky and chaos ensues. Rocket and Punisher just stand there making insults at each other, Ant-man and Dr. Strange just stand aside while the others go at each other.

Gamora takes a swing at Bucky but slices into the decapitated head of Nick Fury which turns out is actually does not belong to the real Nick Fury but a life model decoy. the group begins to ask more questions when a very aged Nick Fury appears with a squad of armed Nick Fury life model decoys.

﻿
So, what does this all mean? I have no idea. Is Nick Fury the one who killed the Watcher? We did see him with the green glowing bullets which were used to kill multiple beings including the Watcher. If
Nick did kill the Watcher, what reasons would he have to do so?

Why is Nick so old now? I can only guess that it is because of the infinity formula that he no longer has access to. The infinity formula is what kept Nick and other members of the Howling Commandos from aging and was sort of a light version of the super soldier serum.. If I remember right, Nick gave his last dose to Bucky back in Fear Itself when Bucky was mortally wounded by Sin, the daughter of the Red Skull.

Not as good as the previous three issues, but not bad. Bring on issue five!
Posted by Greg Osborn at 11:09 AM