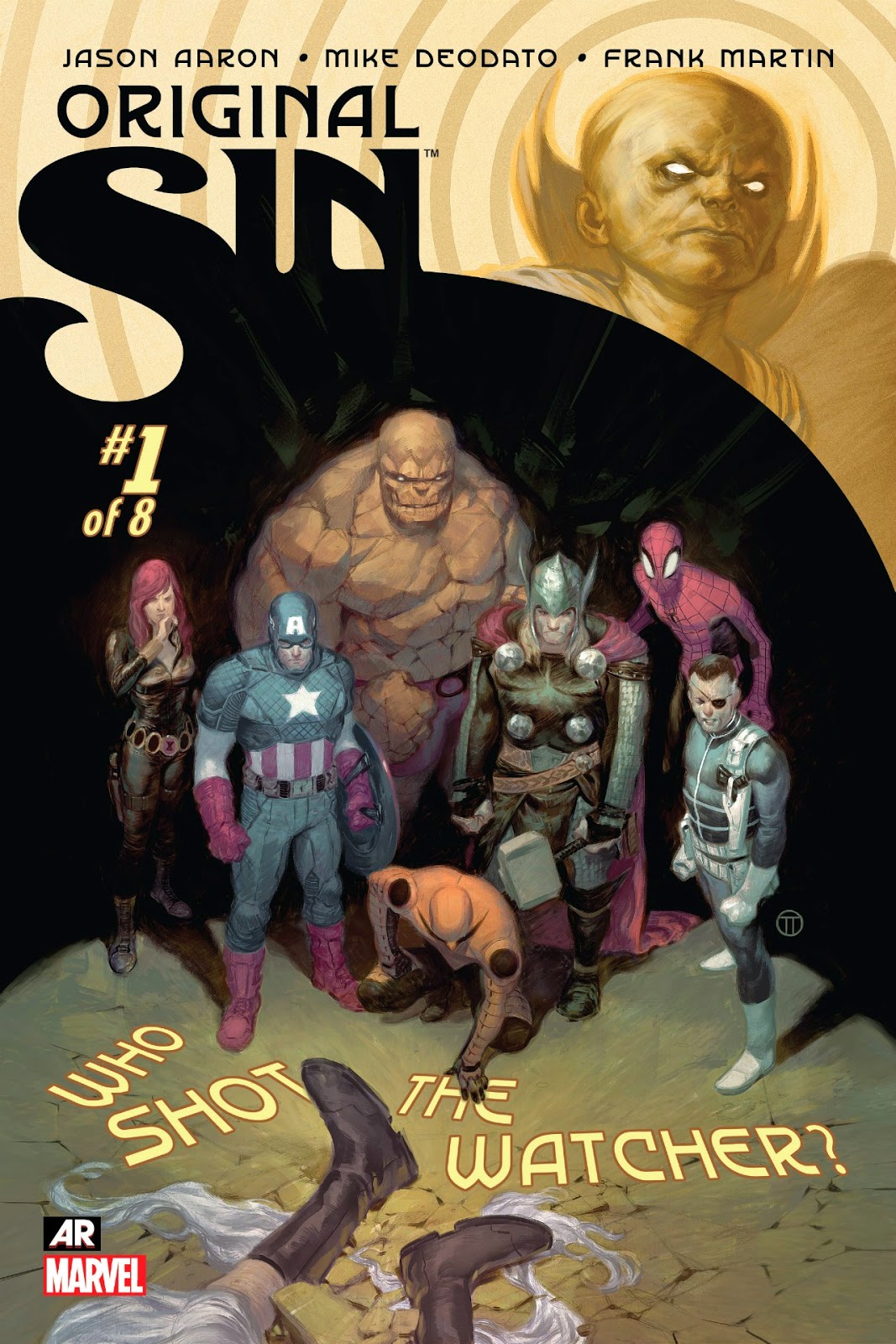 Who shot the Watcher? That is the question being asked in Original Sin, Marvel's first big event of 2014 and the answer will be given to us by writer Jason Aaron, with art by Mike Deadato and colored by Frank Martin. When the series was announced I had planned on passing on it but decided otherwise based on the work Jason has done on Thor and Amazing X-Men, I owed it to him to check this out and I'm glad that I did.

I'm normally a fan of Mike Deadato's art but there is something here that's annoying me. I'm not sure if it's the inks or how Mike's pencils are being colored, I can't quite put my finger on it and I'm just not getting the same amount of joy out of it that I usually do. It's not bad by any means.

Getting into the story, the Watcher knows who killed him. He knew it was coming before it happened and he did nothing to stop it. I'm wondering though if he may have left some clues as to who the murderer is.

Thor discovers the Watchers body and calls it in to Captain America who convinces Nick Fury to go with them to check the crime scene. Once there, they find the Watcher had been shot in the head and has had both of his eyes removed. Cap then asks Nick to head up the investigation, because honestly, who in the Marvel Universe is better at solving mysteries and dealing with secrets more than Nick Fury? The Avengers also discover that many of the devices and artifacts that the Watcher was keeping have disappeared.

We then begin to see some things that don't quite add up.

The first is the cut to T'Challa, the Black Panther looking over several monitors and talking to somebody about the Watcher's murder. The person talking to T'Challa is never identified by name, but you get a shadowed panel of who it is but again, you can't identify him. What's even more interesting is what the person is holding. 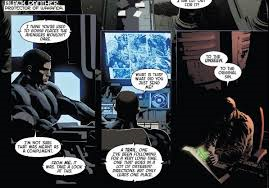 The unidentified person tells T'Challa that the Avenger's can't handle this case and that he needs to be the one to ask the right questions and get the answers. T'Challa is told he'llbe working with a team to help him and immediately following that it cuts to Ant-Man meeting up with Emma Frost. Ant-Man makes the comment that their "boss" must have something her in order to have gotten to agree to help out.

At first I thought it was Nick Fury that T'Challa was talking to. The above would suggest the same as Nick seems to have something on everybody, but I'm not so sure. The above panel, made me think it could be Bruce Banner given the green glowy thing, but what would he have on Emma to get her to help. Also, the conversation with the stranger and T'Challa happened not too long after Captain America put out the alert.

Cut to a warehouse in Los Angeles where Frank Castle is torturing some criminal when Dr. Strange appears. This is the next team revealed. I can see both Strange and Punisher helping Nick out, but again, when we get to the last couple of pages we see Black Panther, Emma and Ant-Man travelling to the center of the Earth and we see Punisher and Dr. Strange travelling interdimensionally. Remember, the Watcher was killed on the moon.

A third team is revealed in space consisting of Bucky, Moon Knight and Gamora. This is the one team that I could really see Fury putting together over the others but again, amongst all three of these teams, none of them mention Fury, Cap or Tony. Sure, it's safe to assume that any and all of these teams were put together by any one of them, right? I thought the same thing until Black Widow found glowy green bullet fragments. 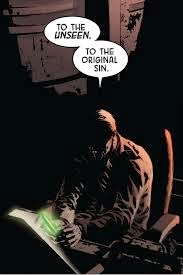 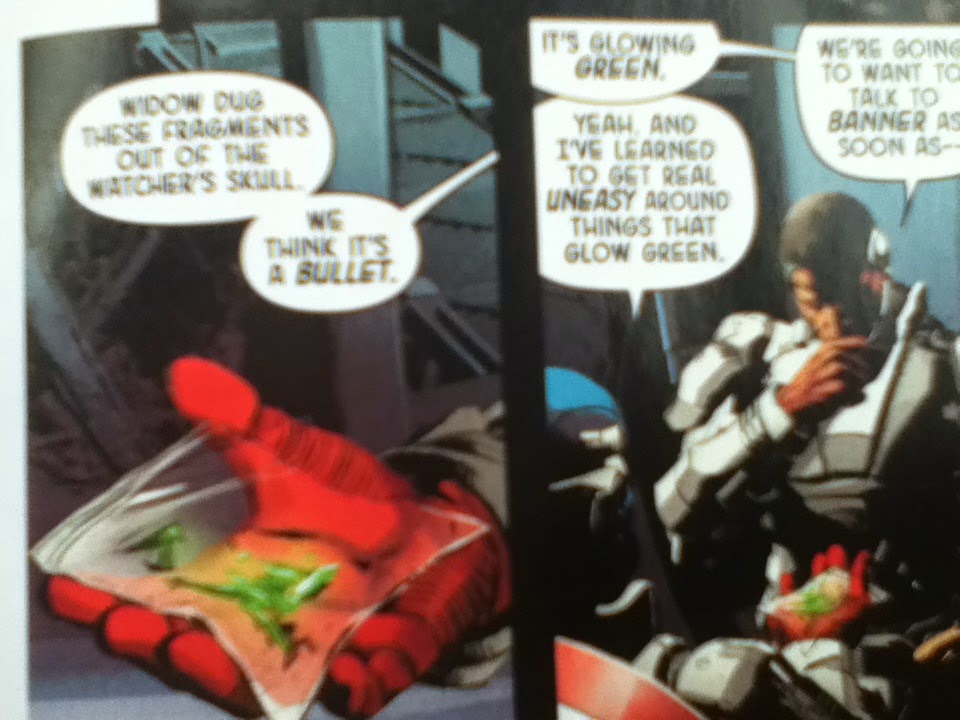 What does that matter? Well, the panel of the the shadowed stranger holding the green glowy thing that looks like a bullet, takes place before Nick is shown the glowy green bullet fragments found by Natasha.

We again cut to Earth where Thing and Spider-Man are taking on a mindless one,  which are magical based creatures from the Dark Dimension that have minimal intelligence and no free will. Except that this one is thinking for itself, communicating telepathically and it's also holding the Ultimate Nullifier which is one of the items that the Watcher was keeping safe. The mindless one can't deal with having complex thoughts and emotions and kills itself using the Nullifier, but we see an explosion similar to what was seen when the Watcher was killed.

We cut to an unknown location where we see several mindless ones running around unable to cope with their improved cognitive functions. We see two figures discussing how they and the mindless ones are evolving because of what they stole. The figures are shadowed but one has a white hood or mask and holding one of the Watcher's eyes. 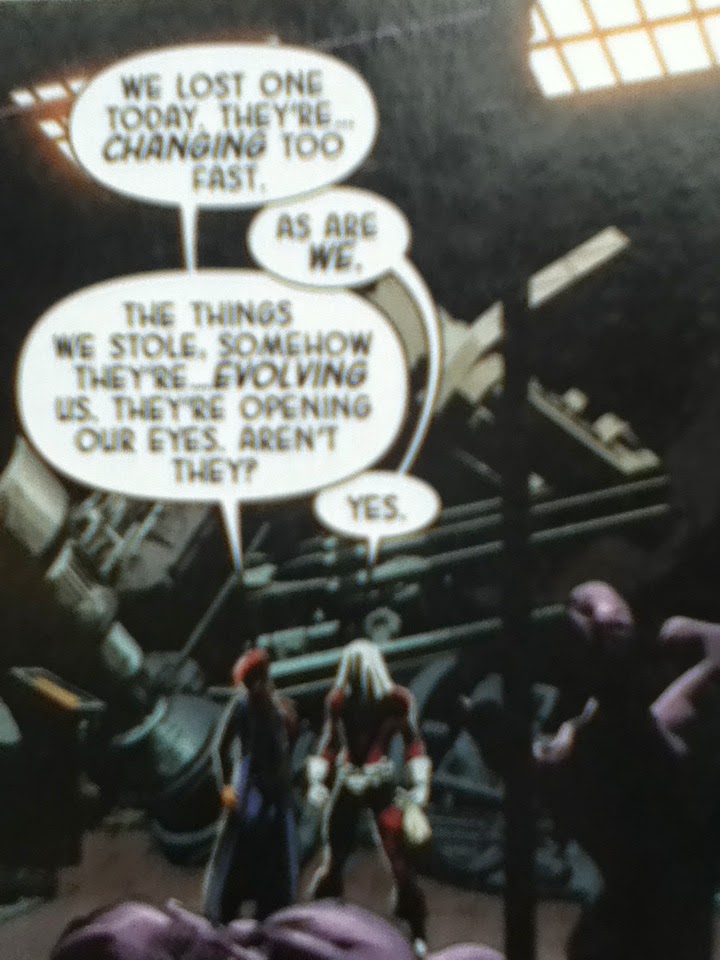 So, how many people Earth side know about the Watcher, have the means to take him out and to summon and control mindless ones? It can't be a very big list. Can the shadowed people be magical, cosmic or extra-dimensional beings?  Possibly. Question after question popped into my head, the sign of a good mystery. Am I overthinking here are do we some legitimate questions being asked here? can't wait for issue two.