The 1990's or Chromium Age of comics is known for many things. The speculation bubble reached an all time high and crashed. Publishers attempted to dictate to their fans what they were going to read and how much they were going to pay for it. The quantity of new first issues was at an all time high. Eventually it all crashed and some companies, including Marvel nearly went out of existence. Among the Chromium Age was the Bad Girl Era of comics. If you thought women were misrepresented and sexualized in comics in the decades beforehand, the Bad Girl Era was all that magnified a thousand times over. One of the characters at the center of it was a young girl named Hope better known as Lady Death.

I first discovered Lady Death somewhere around 1995/96 while hitting up a local tattoo parlor that also sold comics, fantasy art,  trading cards, t-shirts and a small amount of gaming stuff. The shop catered to those that were into fantasy, horror,, goth and the supernatural. This is were I found a lot of indy comic books that I never would have found elsewhere as many of them came from the UK.

Lady Death was created by Brian Pulido and Steven Hughes and she first appeared in the pages of Evil Ernie in 1991. She appeared to Ernie as a hallucination convincing him to swear loyalty to her and to kill every living thing on the face of the planet. But my first foray with Lady Death was with her first mini-series, The Reckoning from 1994.

The story of Lady Death, to me is a classic fantasy tale. It starts in medieval Sweden with a not so normal mortal girl by the name of Hope. Hope is the daughter of Matthias, a tyrant nobleman who turned out to be a descendant of fallen angels that waged war against God and he unnamed mother came from a bloodline that was believed to be linked to Heaven.

Matthias was fighting a war at the same time a plague that was ravaging the land. Matthias began conscripting peasants to fight against his enemies which led to a revolt against him. Matthias escaped by summoning a demon to his aid. The people then captured Hope who accused her of witchcraft. Remembering the incantation her father used, Hope summons a demon to aid her escape, in exchange she must vow to serve the forces of Hell. Over the course of the various Lady Death stories, the character moves from the role of the villainess to an anti-hero and eventually that of a heroine.

One of the stigmas that tend to plague the character is the bad girl image she had from the '90's. Lady Death was and still is drawn as sexy, voluptuous and scantily clad, the book was seen as nothing but a dark fantasy tits and ass book and understandably so. Just take a look below and I think you'll agree. 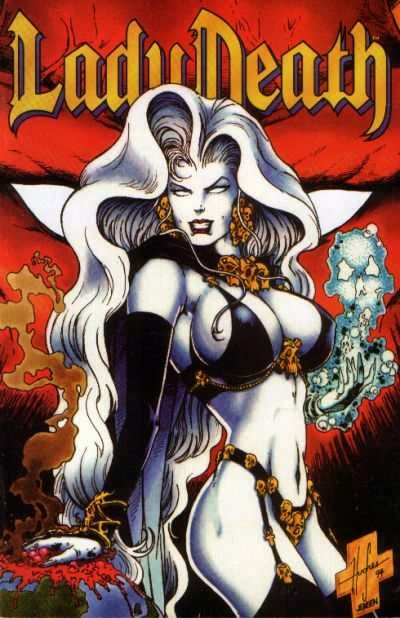 Underneath all of the gratuitous cleavage and heiney shots though, there was actually a pretty good dark fantasy story being told and that was the reason for grabbing new mini-series as they came out.

Chaos Comics eventually collapsed but that would not keep Lady Death down. Avatar Press acquired the right to publish new Lady Death stories but only had the rights to Lady Death and none of the other characters previously associated with her in the Chaos days. The character was given an updated origin story and sometimes had a little more clothing to wear along the way.

I've had a chance to meet Brian Pulido, Steven Hughes and many of the other people from Chaos a few times back in '90's and what a great group of people. They were incredibly appreciative of their fans. I have a few Lady Death books that are signed by almost the entire Chaos crew, even those that had nothing to do with the books, it was part of the fun of being able to meet them. I was greatly saddened by the news that Steven had passed away, losing his battle with cancer. I've also had the chance to meet Mike Wolfer, the writer/artist that headed the current Lady Death ongoing series with Brian Pulido at Avatar.

In 2004 ADV Films released an animated Lady Death film. I allowed my expectations to get a little high for the film. The animation was okay at best and the story seemed to dragged. Don't get me wrong, I'm glad to have seen a Lady Death movie get made, but it could have been better.

Lady Death has appeared in 80 series, most being her own mini-series and one-shots, a few crossovers and elsewhere. The character has proved that she has staying power especially when handled well by creative teams. Not all T & A comics are created equally, Lady Death does provide solid dark fantasy stories that do not need to rely on the over sexualization of the character to do well.
Posted by Greg Osborn at 11:07 PM