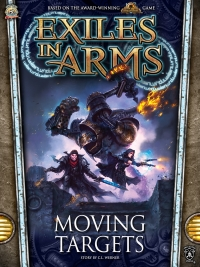 The first volume in the Exile in Arms series, Moving Targets is a well paced, action packed adventure as Rutger and Taryn are hired by a Llaelese aristocrat to escort him from occupied Llael to the port city of Five Fingers while being hunted down by the notorious killer Arisztid Olt.

Earl Alessandro di la Predappio says little of why he must get to Five Fingers and why Olt is coming for him. Ambushes, betrayal, gun fighting, giant gators, one awesome villain with great long term nemesis potential and a final showdown worthy of a Die Hard movie. Taryn and Rutger are clearly the Tango & Cash, Lowrey & Burnett and Riggs and Mutaugh of the Iron Kingdoms. The authors writing these stories have been doing a wonderful job of blending all the aspects needed for good storytelling and C.L. Werner continues that trend. The narrating, action, characterizations, combat, humor are all balanced and

I really don't like giving out plot details for novels, I worry about giving too much away. I'm just going to say that Moving Targets has my highest recommendation, it's action filled and fun as hell. If this is what the duo's future books are going to be like, I'm in for the long haul. I hope to see a rivalry build up between Olt and Rutger & Taryn, it has much to offer. So... if anybody from Privateer Press is reading this, please tell the powers that be to make it so.

This one is good folks, lots of fun, action and adventure. You can find Moving Targets at skullislandx, Amazon and Barnes & Noble.