I saw this when it was posted but didn't think to mention it here. Privateer Press released news last week that their novels and novellas will soon be availble at Audible starting in February and book one of the Warlock Sagas has been available for pre-order for a few weeks now.

From Privateer Press: "Privateer Press is pleased to announce that Audible will soon be releasing a selection of audiobooks from Skull Island eXpeditions’ library of fiction based on the award-winning Iron Kingdoms setting. The first two audiobooks, Into the Storm and Instruments of War from New York Times bestselling author Larry Correia, will be released February 4th on audible.com. These audiobooks feature professional narration and are compatible with a wide array of devices, including phones, tablets, eBook readers, and computers." 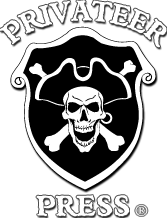